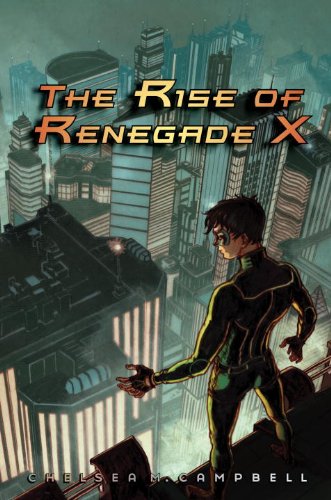 Villainy runs in Damien's family. His mom is a very respected (and feared) mad scientist (dad isn't mentioned, perhaps a lab accident?) and he's quite happy with his family heritage. He's ready to embrace his evil destiny, in fact! He's going to go to the local university for super villains- with early enrolment- take something tasteful, like mad science, and then take over the world. He just has to wait till his thumbprint turns to a V on his sixteenth birthday, and then he's on his way.

Only on his birthday, in front of hundreds of paying guests eager to see an actual villain embrace his heritage, things go wrong.

Because his thumbprint just changed- only not into a V. Damien is now the proud owner of an X on his thumb. The rare and almost mythical progeny of a villain- and a hero.

Damien now is less ready to believe that his dad met with an unfortunate lab accident, or was a turkey baster, as he'd always believed. Now for a spot of non-consentual DNA testing! Yay! That's always good for a laugh...

And then before you know it, we're dealing with mind-control rays, public schools, GIRL ISSUES, flying (omg omg omg omg and not in a good way) SCIENCE, the future, Zombiesand BIG DECISIONS. I'm saying that in a very vague and probably annoying way because I don't want to spoil it for you. ^_^ I'll just say I liked the kissing scenes. And the torture. And the kissing torture. ^_^

Oh, and I think this is the first love triangle I've read that I both enjoyed, thought was believable, and knew right away who I was cheering for. (Now come on, he's caught between a heroine and a villainess. Who do YOU think he should go for? :D) I was IMPRESSED how it seemed entirely believable to me. I mean- granted- everyone involved is insane and has truly twisted ideas of how relationships should work, but I'm cool with that. I can understand that MORE than oh dear pretty fluffy angels you're so pretty and I've never seen you before plz have my babies plz plz plz??? Which is my reading of most relationships, and ESPECIALLY love triangles. *cough* Not that I'm thinking of the classic triangle of our generation *coughJacobBellaEdwardCoughCough* or anything. *cough* Nope *cough cough* I need to go get a drink of water...

*returns, triumphantly hydrated* So yes. The plot just makes me happy to outline, much less read, the love triangle gives me the warm fuzzies, the characters are win- did I mention that? Yes, they are win. Especially when you're moving from first impressions to how people change (or are proven to be exactly the person you thought they were.) They're all LOVELY.

I think at this point you might be getting a vague idea that I liked this book. If you were thinking that, you would be CORRECT. In fact, I gave it five stars out of five. I know there are some technical issues, but I just love it so much. :D You should all read it.

Oh, and Ms. Campbell is writing a book set in ROME next. Ancient Rome. I hope her book after that will be a sequel to renegade. :D
Posted by Snazel at 9:29 p.m.

COOL! I shall read it.

And then you can tell me how sick and twisted I am.

I am super excited now! This is a book that I'm meaning to read for the Debut Author Challenge. It just got bumped up on my list :)!

And DUDE, you guys are SUPER speedy readers! I just posted this!

Who is this person?

Wonderful people who follow me. You want to be a wonderful person, don't you?

Everyone who's ever been here.

First of all, this is just a record, for me, of how much I liked the book. This is Personal Preference! But with that in mind, here's a breakdown.

One star - Didn't like it. At all. My time was wasted and I'm trying to forget it. I would enjoy burning this book.
Two stars - It was okay? I mean, it was comprehensible and all, I just didn't connect with it/the problems were too much to ignore/I would enjoy killing all the characters.
Three stars - I liked it. I'll lend it to my family members and friends, and I'd wave at the characters in the street. I would enjoy watching the movie made from the book.
Four stars - I really liked it. I'll quote it at length, and I'll engage in long, dramatic conversations about the characters with my friends, who I will recommend the book to. I would enjoy reading it again.
Five stars - I loved it. We're in a relationship now. (It's complicated.) It was unexpected, and funny- well, not always funny- but always brilliant. I fretted about the characters when reading it, and I feel like I know them. It made me think in some way, about something important. I would enjoy writing fanfiction/stalking the author/taking pictures with places mentioned in the book.

Sometimes books are on the borderline between stars, in which case I decide which category if falls in with the use of arcane arts involving chocolate, how much my shoulder hurts at the moment, and whacking spoons on the counter. These ratings might be changed retroactively- I am nothing if not fickle. Thus Sayeth The Jasmine.